Nigeria’s Need for a Mind-Overhaul 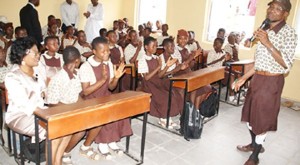 Governor Ogbeni Aregbesola, the face and agent of APC-driven change in Osun state

We need not only an overhaul of Nigeria’s physical infrastructures, there are strong reasons to propose a complete mind-overhaul for Nigeria. Reform starts in the head. Prof. Adesanmi’s call for a psychological rewiring and demand for a reintroduction of civics in Nigeria are, in my opinion, not unconnected with a desire for a mental-overhaul of the Nigerian. I suppose the reason being this: Somehow we know that there can be no true freedom without mental freedom. We tout the popular Reggae quote which demands Blacks to free themselves from mental slavery, but reality confirms that we understand these words to be true but care less for practical realization.

Our sense of what is acceptable is noticeable already in little things. Take for instance, we readily accept to be moved with a goat-cargo from point A to B. After all, they are just goats! Chickens and other domestic birds scratch waste-hills in front of houses with stinking open gutters. After all, they disturb nobody! Chickens are beautiful and goats are the least of my worry. The open-gutters worry me more than the threat of a potential bird flu-outbreak. After all, the goat will move-on and the chicken will go away, but the open-gutters and their many deaths are part of our daily lives!

The problem is this: Humans and goats for transport do not belong in the same train or lorry, bus or car etc. It is a matter of health, and dignity too. Chickens and these other wonderful birds deserve to live in peace, no doubt, but we need accept we live better/safer when they are reared and transported separate from humans.

Lets move away from goats and chickens. In talks/chats it can be seen many Nigerians condole abuse. Political abusers know this. So when Nigerians fight (back) in protest, they needed only to be given time and they shall justify their own sorrows in ways that beat the imaginations of their abusers and tormentors. Many times, they find reasons to blame themselves for the failure of politicians and leadership.

Talking about justifying/supporting abuse from the leadership, here a practical example: Bishop Oyedepo slapped a worshiper in full public glare and he got away with it! Did I tell mention someone said the victim deserved to be slapped? This is the justification: She said she was witch for Jesus! Does Jesus have witch ni?! It did not stop there: After all, he won the case in court paapa.

I was short of words. 1. How do I explain Bishop Oyedepo erred when he slapped? 2. How do I explain I do not dislike him but his action, so that faithfuls do not only see shit-storms thrown at a man of god? etc etc.

Our willingness to self-explain plus justify abuse is a cool alibi exploited by politicians in matters of national importance. They have always bet on Nigerians to (1) either self-explain injustice and (2) forget completely or overlook crimes as if they never happened. The consequence is visible countrywide.

This state of mind explains why public school children learn in the most undignified conditions. Over the years, the practice has always been to give an already dilapidated school complex a face-lift. Whereas somewhere in faraway Yola or Ota some children learn in air-conditioned classrooms with Western grade teaching/learning materials.

Incredibly strange, but true, many poor (wo-)man readily accepts it is “our lot” to be poor. They are quick to conclude that someone somewhere has it worse! Well, no doubt about the relativity of poverty. The question is, do I have to die of hunger because I am poor and if my children had to be taught in spaces not fit for a pigs?!

Governor Okorocha in a badly equipped classroom. He is the face of APC’s breathe of newness in Imo state. His speech was lauded one of the best at the APC convention that threw up General Buhari as the next messiah

This kind of problematic acceptance of evil fate is another reason for the necessity of a mind-overhaul.

To advocate for an outright eradication of poverty in the land will be Utopian, but like Nelson Mandela said, there is a level of poverty that should be unacceptable to Nigerians (paraphrased). This unacceptable descent below the acceptable is the problem. This unacceptable poverty level is best daily noticed in the wealth-flaunting-mentality of the Nigerian noveaus-riches. Many in this group are probably least interested in oppressing the already-downtrodden. They only confirm that Nigeria’s poormen and -women are kept real-hard down, so they show it when they finally “made-it”! Add to that a mentality that these children deserve the kind of classrooms photographed in Arinze Primary School in Edo State. A poorman’s descent into the hottest part of hell is then complete. Arinze Primary School with different shades and grades litters the nook and cranny of the country. 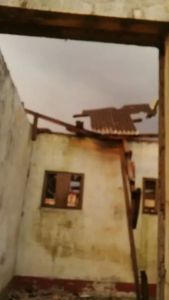 Crazier it is when one imagines a woman who scoops water from a real dirty mud-pool, but covers her nakedness with a wrapper demanding the reelection of President Jonathan or the installation of General Buhari as the change we earnestly demand! Could there be a starker nakedness than this display of ignorance! Let me put it banally: it is a wishful hang-on to life yet begging to be raped harder by a killer. Such contradictions?! Yes! We are talking Nigeria. Really, we live in strange times in that beautiful and yet strange space.

How we see ourselves matters on the road to charting a way out of bedeviling problems. Allow me to illustrate a point. Governor Aregbesola was in a classroom dressed in a school uniform. Governor Okorocha followed suit. He was photographed in a classroom. What is the problem? Here: Mr. Okorocha was in a terrible classroom. Apparently, he was only interested in the photographs, and not the teaching conditions. The blackboard speaks volume.

If a governor thought that kind of blackboard good enough, then I need not tell us there is trouble. Governor Aregbesola’s attempt to beautify public primary schools (new uniforms, benches etc) apes woefully what is good. Mind you, these are performing APC-governors. I wonder what terrible governors would show for performance!

Add to these two a visit to a typical classroom in a public primary school in Lagos state to get the picture of the bigger trouble with Nigeria. My choice of Lagos is obvious. APC and particularly Governor Fashola are the present paradigm of good governance in Nigeria. Compare what you see with a five-star private school in the same state. Be sure to upload on social media your report before you break down in holy-tears and anger! Our children do not deserve to be abandoned like this! 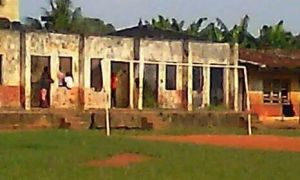 Morning shows the day. That is a public school in Edo state, an APC controlled state. Exactly why many conclude APC is PDP. Positive change is compassionate and not wicked.

I once wrote a piece on the need to see our school complexes/buildings in the right historical context. Chief Awolowo rightly pointed out in his autobiography that the structures were decided for considering finance and urgency of the moment. That was over five decades ago plus government was financially much “poorer” than today. Definitely, Chief Awolowo intended to improve/replace these public school buildings/complexes with structures like those in present day The Bells, Winners Chapel Secondary School and other five-star private schools all across the country. We however lost that vision and are stuck somewhere in the past.

In this light, if there is any set of Nigerians that needed the mental rewiring most urgently, it is the leadership. I agree with Achebe, partly. Nigeria has a leadership problem, not a followership problem. One of the biggest problems is a leadership surviving on over-hyped achievements while it abandoned many things that matter. For every 10km of road constructed, for which a governor “hired” journalists to robustly media-report, there are more than ten over-congested plus badly equipped classrooms which the governor pretends not to notice. Many problems and more rot stare the leadership in the face. Its choice of looking away makes the mental rewiring in these leaders more urgent than ever before. So, while the rewiring of the leadership cadre is but most urgent, the people, i.e. followership must not be spared the difficult road down the house of the mental-overhauler. We just cannot afford to live on without it.