Between Abeokuta and A Troubled Ijoko-Ota 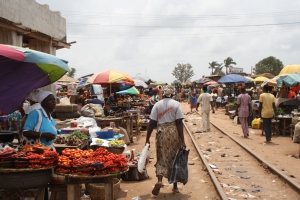 We were in Abeokuta. That was Day Three on my plan. I had written a timetable for each day while in Dortmund. After two days in Nigeria, I almost abandoned it but for the German Spirit I have imbibed over the years. One thing I learnt in the first two days is, it is not good wisdom to sit down in Dortmund to plan for life in Lagos and environs. One must be on ground to do correct realistic situation assessment to plan well. Same logic is applicable to many of President Buhari’s plan for Nigeria. Think of a (wo)man in a government house, with 24 hours electricity supply; if (s)he told you he had sleepless night because mosquitoes would not let him sleep in peace or that (s)he cared about the miserable light supply in your village, town, city and wherever you live, then you have just seen the face of a lying thief. All you left with is to catch him/her! 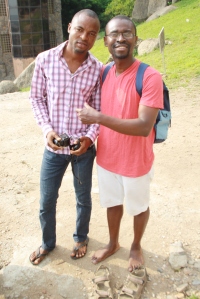 With our self-appointed tour guide and cameraman

With the epileptic power supply I had to make do with during my Nigeria’s visit, I have sworn not to be convinced with a Buhari-is-working-mantra until he fixed power problem in the country. We must remember, the road to hell is full of good intentions. Generation is currently at 7000 megawatts; calling it 7000 megawatts is a beautification of bad nonsense. We call it in gigawatts, and our own shame stares us in the face. 7gigawatts is all we generate. Can you now see that kain shame that wears no clothes? So you know, Nigeria generates far less than Dortmund Power Works generates.

Anyway, back to my nearly failed plan. The German Spirit notwithstanding, the Nigerian Factor tried very strongly to hijack me. Fowosere and his girlfriend picked me from the airport. We drove to Ijoko-Ota. Tired and worn out, I still did not go to bed, drinking started in earnest. Before long, I realized I was beginning to exaggerate the excitement. I went to bed drunk and unsatisfied. The second day went the same way. On the night of Day Two I connected with Patrick in the hope of keeping to plan. I spent the morning hours of Day Three with Patrick, and a driver who drove us to Abeokuta. Gajuwa, my personal assistant, joined us. We embarked on a ride to Olumo Rock around past midday. Thereafter we traveled to Olodo to see my father-in-law. After Abeokuta, I kept to plan. If there was any change, it wasn’t a major one, unlike in the first three days when I nearly gave up on the whole adventure.

By the way, it’s just barely over three months into President Buhari’s APC-government. So, like in my case, I am sure there is still enough room to accommodate all the change promised if APC meant to implement change indeed.

Olumo Rock. We were welcomed at the gate with the news of a bad elevator, so that we could decide on spot if we wanted to see the historical rock or not. They don’t allow visitors enter the gate before they pay the fee. I was appalled by this kind of welcome. We requested the young worker to let us drive in before talk of money. He agreed, and we were in. We paid. I had thought he was our tour guide. How mistaken I was! He collected money, went to a kiosk to bring us receipts, then pointed. “The Arts Galleries! The tour starts from there! They will show you the places! And from there to the Rock!”

I was vexed but my excitement did not let me express my disgust at this kind of treatment. We took pictures at a water spring, The Pot of Life. The exhibitions were cool. We saw Opon Ifa, Igbako, Egungun, books, Obasanjo’s latest book was there, African fabrics, bracelets and other traditional souvenirs. For sale. I did not buy any. Out, a young man joined us, he is a photographer, but since we had a Canon camera and my Smartphone, Amebo’s inbuilt camera as well, I thought at first the photographer’s service would not be needed. One thing I later thanked him for was that he took the initiative, uninvited, to join us. He gladly took us pictures with our camera, and he became our tour guide almost immediately, it was not agreed on, but he did all the same. He showed us around, leading the way to places that matter in the Rock. 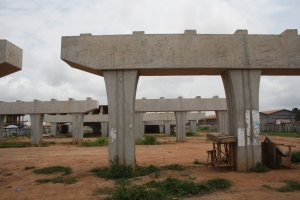 When we finished, taking the staircase to descend, I looked at the elevator at close range. From the accumulated dust in the glassed house, it was clear it has not been used, or cleaned, in a very long time. Like the elevator is permanently out of use, not only for lack of electricity, the functionality of the thing is doubtful. I was not surprised. I was just further disappointed.

We saw a warrior’s grave, Sodeke, I think. Abandoned like a commoner’s grave in a forsaken cemetery. If not for our tour guide, I would have concluded it was just any other grave. This is how Nigeria treats her heroes and histories. Treated worse are Nigeria’s own dogs, beaten with sticks and clubs at any show of friendliness or kindness. We were brought to a small opening under the rock. We entered one after the other, taking picture and laughing out loud. For our entering this space, we were told our Abeokuta visit can now be truly so called- We can say with conviction we have been Under-The-Rock!

Our cameraman cum tour guide did well to warn us ahead of our next stop. We insisted on seeing them. We met a group of old women, one of them is 128 years, very old. Iya Agba was eating Eko and vegetable. There was dried fish in the vegetable sauce. Flies flew here and there, perching on the food at will. I took picture with the old woman. There is no better way to tell of the misery of old age among people with no money in Nigeria. They are abandoned to the mercy of visitors and the comfort of flying flies. I am not sure if death would be a redemption for them, if Sodeke’s grave is anything to go by.

We saw an Iroko Tree, then another Big Tree. Seeing the Big Tree, touching it, accompanied with a Confession of Faith was fortification against all enemies who wished evil on us. I led the Confession of Faith, thinking, not only of APC and friends of Nigeria’s PDP, but also of the dust on Ijoko Road, the dirt that littered all nooks and crannies, the dilapidated statures of Sodeke at a Roundabout, and the nonchalance that envelopes everywhere confirm dubious achievements fronted by Senator Ibikunle Amosun (SIA) in expensive billboards and radio jingles. In truth, there is no better way to know a broad-daylight thief than a visit to SIA’s Abeokuta and Ijoko-Ota. Come to think of it, the people of Ogun state love him like their own neck-muscle. Jesus and all gods in the state combined must intervene to change the face of this charade called change. If there ever was a change between my last and my latest visit to Abeokuta, then I did not see one.

Ijoko-Ota. Our street, named after my father, Solomon Ajagunna, now has a transformer. Placed three houses away from our house. The fence that shut us away from the people who love us is now old. At least from outside. The gate was padlocked, there was a Ragolis-Bottle tied with a rope. Before I wondered too far, I saw NEPA bills in it. Then I noticed every house has it. If NEPA came and met nobody, they will cut light, I was told. “What light?!”, I seemed to ask myself. This one that I hardly could afford to stay out late, not that anyone was going to prevent me, but the darkness that troubled the land was so thick that even NEPA would need a giant torchlight to go through a thief-infested lightless night.

Ijoko-Ota has changed. Like Nigeria. It has changed. Really. The change so caught my attention, it took two people who live elsewhere to tell me the city has never been the same again since the Obaship tussle between Baba Yayatu and Chief Matanmi. Until recently, people from both divide still slit throats of supporters from opposing camps. A cat and mouse game. Only that these are real human beings killing each other realtime. All one needs to be a victim of strange death is to be at the wrong place at the right time. Or say it the other way- as confirmed by a family friend who was at the right place at the wrong time. He escaped being butchered by a strand of hair. The Ijoko-Ota I met during this visit was certainly not the town General Abacha left behind when death took him. Ijoko-Ota was peaceful until Chief Obasanjo installed trouble. It is a different city now. 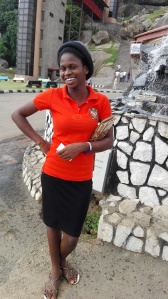 When I was told our road is now very good, I was thanking Goodness the abandonment we suffered from Chief Osoba, made worse by Chief Obasanjo, has found an end in SIA’s APC-government, in its second term. Starting from where we used to have Kings Oil Factory, or even much earlier into Sango Area, the condition of that road is a big shame to anyone talking of eight years of change. There is no other way to word it: Change is yet to arrive in Ijoko-Ota. Our roads are not smiling at all. In Ogba-Iyo Area, a bridge is half-complete. The Railway has been taken over by market women who have no other decent means to sell their markets.

Struggling not to have a punctured tyre from sharp to rough stones, one is always trying to escape being run over by big big transporters, and from carefree Okada riders manipulating around endless jagajaga roads. I was beyond shocked when someone accused a motorcyclist of insincerity because he spoke the truth. “Don’t tell me SIA has not tried for Ijoko-Ota. With all he did for you people here!? Is this road not worse than this before he came? Now see what The Governor has done to better it.” In my mind, it is like comparing GEJ’s corruptness to Buhari’s body-threat to kill corruption. All the while I was trying not to get choked from dust entering my nose, eyes and ears. I had long thrown away my handkerchief after it dirtied beyond redemption. I gave up trying to talk. We had just escaped being caught on the sideboard of a trailer. I was going to exert my leftover energy on praying my way into safety. 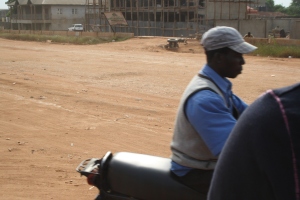 A major road in Ijoko-Ota

Like I said, we were in Abeokuta. We returned home from Olodo. The road is relatively better, this doesn’t mean it is a good road. Like many roads in Ogun state, we met potholes at intervals, avoided them expertly, looking forward to the next. Home is always a good refuge from the madness outside. My cousin’s wife would not allow me lift a pin, she ensured I was well taken care of. She served us Ofada rice, and correct roastfish. That flathead fish. The soup was hot, I ate it. The cucumber she served with dinner, I ate all. The following morning she served us bread with fried eggs to match. I drank two cups of warm chocolate tea. Then we took pictures, and more pictures before Gajuwa and I were brought to the motorpark. We continued to Ibadan on my ten-day sojourn in APC’s Changed Nigeria.